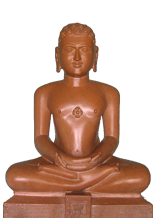 Arihant, Siddha, Acharya, Upadhyay and Sadhus are five Supreme Souls (Permeshthis). One is relieved of his sins by bowing before them.

Arihant- One who has destroyed the four Ghatiya Karmas, is embodied with forty six virtues and who is devoid of the eighteen faults are called Arihant Parmeshthi (Worthy Soul).

Siddha- One who has destroyed all the eight Karmas, having eight virtues and live on the upper most end of the universe are called Siddha Parmeshthi (Liberated Soul).

Acharya- One who possesses thirty six virtues, is the head of a Sangh (consisting of Munis, Aryikas, Shravakas & Shravikas), teaches, initiates (gives Deeksha) and gives prayaschit (rule of repentance) to disciples is the Acharya Permeshthi (Preceptor).

Upadhyay- One who has the knowledge of all the eleven Angas and fourteen Purvas or has read (studied) all the main scriptures of that time and teaches the pupils of the Sangh is called Upadhyay Permeshthi (Spiritual Teacher).

Sadhu- One who observes the twenty eight basic principles (Moolgunas), is busy in learning (studies) and meditation for observing Ratnatraya is known as Sadhu Permeshthi. Acharyas, Upadhyayas and Sadhus do not wear clothes and are completely nude Munis (Saints).
Upto here we have specially described the eight basic virtues (eight Moolgunas).