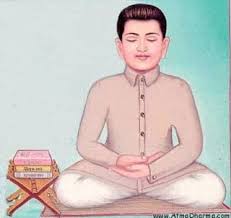 Once upon a time a tribal Pururava wished to kill a Jain saint. However, his wife stopped him by saying that he is a forest deity.

Thereafter he bowed to the saint. The saint explained him about the virtues of life. The tribal accepted the vow of not taking wine, honey, meat and all the five Udambar fruits.

Since he accepted this vow he was born in the heaven as a deity after his death. Later on the same soul of the deity became Lord Mahavir.

One who has given up eating of the above eight articles, possess Asht Moolgun.

1) Not to drink wine

4) Not to eat after sunset

5) Not to eat any five of the Udambar fruits.

6) Not to kill living beings or having compassion for all being.

7) To drink only filtered water.

The qualities which are fundamental are called Moolgunas. As there can not be a tree without root, similarly one can not be a real Shravak (householder) without accepting the above eight basic qualities.

Eating even a drop of honey is equivalent to the sin of burning of seven villages.

Similarly you are committing a great sin by consuming (eating) meat or wine. You are killing innumerable tras living beings by eating any of the 5 Udambar fruits of banyan, peepal, pakar, kathumar or goolar. Therefore you should abstain from all these things.