It has been described in Jain Granthas like Padmapuran etc. that in the Teerthkal of the 20th Teerthankar Bhagwan Munisuvratnath, 99 crore Mahamunis attained Moksha from Mangitungiji Siddhakshetra about 12 lac years before from today. This Siddhakshetra is presently situated near Tahrabad about 125 Km from Distt. Nashik-Maharashtra (India). In the Northern direction of Mangitungi (Bhilvad) village, there is a huge mountain having twin peculiar peaks. One peak is called as Mangigiri, while the other is famous with the name of Tungigiri. The whole of this hilly area is known as “Galna Hills”. Mangi at 4,343 ft height above sea level is the Western pinnacle while Tungi, standing 4,366 ft high, is on the Eastern side. 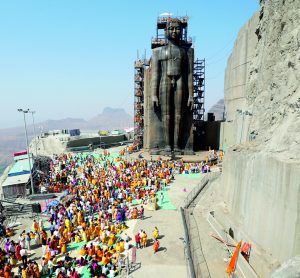 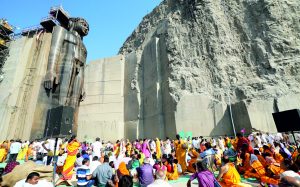 Mangigiri & Tungigiri are quite important from the Jain point of view because there are a number of ancient Digambar Jain caves on both the mountains with very ancient idols of Jain Teerthankars & Mahamunis along with Yaksha-Yakshinis at various places. Two caves are more famous with the names of Sudh-Budh Gufas, at a height of about 250 ft, having moolnayak idols of Bhagwan Munisuvratnath and Bhagwan Neminath. Hundreds of Digambar Jain devotees have the darshan of all these idols everyday coming either on foot or by doli. At the base of the Mangitugi mountain also, there is a campus of old Digambar Jain temples.

A divine history was created in 1996, when the Supreme Jain Sadhvi Pujya Ganini Pramukh Shri Gyanmati Mataji gave the inspiration for the carving of 108 ft. high standing idol of the first Teerthankar Bhagwan Rishabhdev facing towards the East direction on Mangigiri during her chaturmas here. Although it was only an impossible appearing imagination at its inception, however the sincere wish of Pujya Mataji led the dedicated devotees especially Karmayogi Br. Ravindra Kumar Jain (now Swasti Shri Ravindrakeerti Swamiji) & his team to convert this dream into reality with full guidance of Pujya Ganini Mataji & Pragyashramni Aryika Shri Chandnamati Mataji.

On 3rd Mar. 2002, the Shilapujan was performed and by the great blessings of Pujya Mataji, the grand Shila was cleared between the mountain for the carving of the 108 ft high idol. This became possible by the untiring efforts of about 10 years. The carving of the face of Bhagwan was started on 25th Dec. 2012 and with continuous hard work, the full idol was constructed upto 24th Jan. 2016.

The whole Digambar Jain Samaj of the country & abroad associated with this mega-project in terms of donations as there was a clear vision in Samaj that the project taken in hands by Pujya Ganini Gyanmati Mataji is guarenteed to be completed. Indeed, the sinceremost & true dedication of Pujya Mataji for the Prabhavna of Jain-Dharma became the base for the success of this unprecedented task.

As a matter of fact, this mega-project was taken in hand for the preservation of the culture and the development of an ancient pilgrimage centre so that the principles of the Jain Philosophy along with the Indian Culture may be disseminated throughout the globe and lacs of devotees and tourists may imbibe the Universal message of Non-violence & teachings of VEETRAG TEERTHANKAR LORD RISHABHDEV for ages to come.

Besides this, Pujya Mataji was inclined to establish the ancientness of Jain Religion in the world by this great idol of the first Teerthankar Bhagwan Rishabhdev, who propounded Jain Dharma crores of years back in the present age. Bhagwan Mahaveer Swami was the 24th & the last Teerthankar of this age and not the founder of this Dharma as popularly known in the outside world.

This unique wonder of Jain-Culture is situated on Rishabhgiri Mountain of Mangitungi ji Siddhakshetra, so each Digambar Jain should have the darshan of 108 ft. high Bhagwan Rishabhdev Idol at least once to feel proud of our culture along with performing Pujan to earn unmatched Punya.